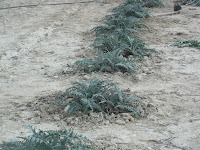 Globe artichokes (Cynara Scolymus) are a wonderful perennial, if space permits, which produce an abundant crop of nutritious hearts.

They are best grown in a position that enjoys full sun, in a well draining soil but a soil which is moisture retentive.

We planted a row of purple headed globe artichokes from offsets in 2011 and as they are coming up to their third year of cropping and it's time to consider replacing them before their productivity lessens.

We removed offsets from our existing plants, to leave about 6 plants, and set out another row. When 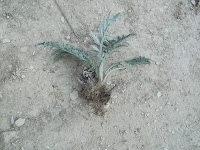 removing offsets use a sharp spade to divide the offsets from the plant, try to leave as much root as possible attached and then remove most of the larger leaves. Set the offsets about 1.5 meters apart but beforehand add some manure to each planting hole.

In there first year of growth, presuming they all take, the plants will not usually flower but it's good practice to remove any flower heads which do appear to give the roots time to get established. So we will crop the original row for a further year before keeping some offsets and digging the plants out completely. 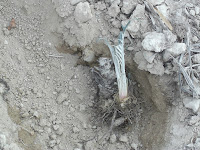 During our replacement cycle we will have one year when both rows are cropping but we will cope with the surplus somehow. Once prepared any surplus globe artichoke hearts can be preserved by freezing or in olive oil.

There are numerous globe artichoke recipes to try but a traditional Cypriot recipe is to stuff the hearts with mince meat and rice dolma style.

But one recipe which we look forward to when the globes are in season is soup. Follow the link to try globe artichoke soup which also contains instructions on how to prepare the globes for cooking -http://cyprusgardener.blogspot.com/2011/06/globe-artichoke-soup.html
Posted by cyprus gardener at 20:53