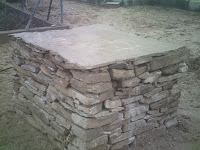 We started construction of a wood fired oven by building a square dry wall base up to waist height to make using the oven easier. The stones had to be transported by wheelbarrow about 100m and it took quite a few trips to get enough stone and quite some time to select stones with a flat enough sides to use.. The top layer was leveled off by using a spirit level placed across each wall on a long beam and although it's not perfectly level - it's pretty level. 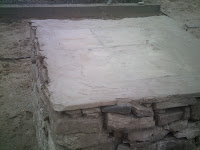 The next step was to fill the center with more stone (thankfully of any shape or size) and any other available rubble. Once the center was filled to within 25cm from the top, the next layer was added which was mixture of straw and soil, mixed to a mud, to provide an insulation layer. Small stones were used to fill in any gaps in the walls and finally thick stone tiles were placed into the center to provide the oven floor. The gap between the oven floor and wall edges were filled to the same level as the oven base with a mud mixture.

We will now leave Part 2 of the oven construction until the Spring which will allow time for settling and when it will be warm enough to start building the earth oven, allowing the mud mixture to dry well..

Wood fired ovens (fourno's or firin's) are seen throughout Cyprus and have been used for many centuries. They are fired-up traditionally using olive and carob wood and once white hot the ashes and charcoal are swept to the edges of the oven. Once up to temperature the oven is ready to use for the next four to ten hours. Traditionally used to bake bread or kleftico (translated as stolen meat) which is a lamb which has been basted in olive oil and oregano and then cooked with garlic, onions and new potatoes. A wood fired oven reaches 370c and this high temperature when baking bread causes dough to rise very rapidly producing a wonderfully thick crust but at the same time trapping air bubbles inside to produce a light and very airy bread. And the even heat is ideal for cooking kleftico and other casseroles or to provide fast pizza.
Posted by cyprus gardener at 11:14