Seed Sowing
Seeds can either be started indoors to extend the growing season, sown directly where they will grow to maturity or sown in a nursery seedbed for transplanting into a permanent area when ready.


A nursery bed should be established in an open sunny position which has been worked into a fine tilth by hoeing, forking and raking and where stones and weeds have been removed. The soil in a nursery bed does not have to be too fertile as young plants are not too demanding. With the use of an electric propagator, to provide a steady temperature, and a good seed compost seeds germinate easily either in trays, pots or modules. Propagators are an expense worth considering as the results obtained in germinating seedlings pays back the initial outlay and running costs are minimal.
Seedlings can be pricked out when large enough to handle and gradually potted on until ready for planting in their final location. It is, however, important to gradually harden off plants by gradual exposure to outside conditions before planting out.
Whether sowing indoors or outdoors the germination failure can be reduced by (a) not sowing outdoors  too early before the soil is warm enough; (b) not sowing seeds too deeply; (c) not allowing a hard crust to form on the soil for outdoor sown seeds which will not allow seedlings to emerge (d) do not allow seeds to dry out, keep outdoor seedlings moist and if very dry water drills before sowing and keep seeds sown indoors covered until germination occurs.
Indoor Sowing
Whether using pots, trays or modules for sowing the following principles apply: ensure containers are clean to avoid diseases; use good quality compost to fill the containers and firm down well and ensure the compost is level; water well using a watering can and allow to drain; sprinkle the smaller seeds lightly over the surface or space larger seeds apart; cover the seeds lightly with dry and sieved compost and place into the propagator. If you are not using a propagator, place the containers somewhere warm but to prevent rapid drying cover with a sheet of glass or place within a plastic bag and place something over the containers to exclude light such as cardboard or newspaper.

Examine containers daily by removing covers and at the same time wiping off excess moisture. Soon as germination takes place remove the cover but keep the seedlings in a well lit area but away from direct sunlight which will scorch them. The seedlings can be gradually introduced to outside conditions and sunlight as they become stronger. Do not allow young seedlings to dry out but water gently using a spray gun set to fine.
Seedlings can be pricked out into larger containers when large enough to handle which is usually when they have two leaves. Make a hole in the compost of the new container and handle the seedling by its leaves, to avoid root damage, drop into a prepared hole at a depth so the leaves are just above the soil and gently firm the soil around the seedling. Water using a spray gun set to fine and keep in a shady position for a few days to allow the seedlings to recover from transplanting and reduce possible wilting. As plants develop and before planting in their final positions gradually harden off by exposing plants to more and more periods in outside conditions and just before planting out plants should be outside day and night for a period.
Outdoor Sowing
Seeds can be sown singly, in wide or narrow drills or by broadcasting. Always sow thinly to avoid overcrowding, make thinning easier and reduce seed wastage. Always follow the guidance with regards to depth and row spacing and cover lightly with fine soil.

Large seeds like peas and beans, sweetcorn and marrows can be sown singly in holes relevant to the depth required by each.
Wide drill sowing of about 10cm wide and as to a depth required by the relevant vegetable is suitable for crops which do not require thinning such as peas, radishes or cut and come salad leaves.

Narrow drill sowing is the main method for crops which cannot easily be transplanted such as carrots, beetroot and parsley. Use a pointed stick to produce a straight shallow drill between two points marked by a string line and put a small amount of seeds into the palm of your hand and taking a small amount between your thumb and forefinger conservatively spread seeds along your drill. Believe it or not this is far more accurate and less wasteful than trying to shake a seed packet along a drill. Press the seeds into the drill and cover thinly to the depth required.
Broadcasting is a method where seeds are scattered and raked into the soil and is generally used where thinning or spacing is not required such as when green manuring.
In the dry conditions of the Mediterranean, and whichever method of sowing used, it is advisable to water the bottom of sowing drills or holes before seeding to speed germination. Larger seeds, such as broad beans or peas, can also be soaked for 24 hours before planting to speed germination.
Thinning and Transplanting
To prevent overcrowding in permanent beds or in the seed bed seedlings will require careful thinning when large enough to handle. This is best done either early morning or early evening but in both cases after earlier dampening. Surplus seedlings should be removed and either eaten, composted or in some cases such as leeks and lettuces transplanted to elsewhere to continue growing. Thinning can be done in stages until plants are at the required spacing. 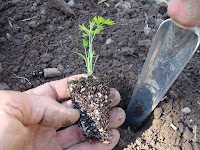 Plants raised in a seed bed need to be transplanted to permanent positions and the best time for this to be undertaken varies from vegetable to vegetable. Certain principles, however, apply: always transplant early morning or early evening to minimise damage caused by the suns heat; always dampen the area surrounding the plants and the area to which they are to be moved; handle plants by their leaves rather than by their roots to avoid damage and ensure plants are well heeled in and watered.
Posted by cyprus gardener at 17:36