One of the culinary delights at this time of year is the abundance of globe artichokes (cynara cardunculus) which is a thistle headed perennial plant.

Globe artichokes are best planted from offsets in November and you can expect to harvest 10-12 heads per plant between April and June. Ours are now in the second productive season and we have a glut of them. We have been busy cleaning and freezing artichoke hearts for use in cooking with broad beans or to use in many other recipes. The heart comprises of the fleshy base which is delicious raw and the mass of the artichoke, called the "choke", is inedible. 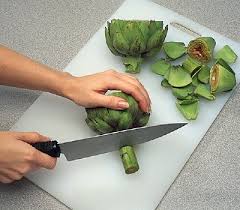 Studies have shown that artichokes contain a very high amount of antioxidants in the form of phytonutrients. Among the most powerful phytonutrients are cynarin and silymarin, which have strong positive effects on the liver and help to detoxify harmful chemicals from the body.

When artichokes are in season, find as many recipes as possible to include them in your diet.
Posted by cyprus gardener at 17:25