Snakes of Cyprus - coming out of hibernation

Snakes hibernate in mountainous areas from around November till the end of March but in coastal regions hibernation can start as late as January.

There are 8 species of snakes in Cyprus, only three of which are venomous but only one which is very dangerous.

Most of us have a innate fear of snakes which some researchers have claimed has evolved to protect us from attack. This fear, however, appears to be greater than the risk and although around 20 people a year are bitten in Cyprus, there has been no death following a snake bite for many years. It is also reassuring to discover that all hospitals in Cyprus have stocks of anti-venom.

The most dangerous snake is the Blunt Nosed Viper and a snakebite requires immediate medical attention. The snake is a dull greyish brownish colour, can be as long as 130cm and is a front-fanged. It is most identifiable feature, however, is its blunt nose. The snake is generally seen near wells, running water or in shaded locations under rocks or shrubs. It will only attack in defence and if disturbed will hiss loudly before attacking very quickly. It's danger comes from the fact that when it strikes, it's teeth remain embedded in the skin and movements by it's jaw pumps venom into the wounded area.

The Montpellier snake is also venomous but its venom is not life threatening. A bite will, however, cause a painful local swelling and a severe headache. The snake can grow up to 2m in length, is greyish brown in colour and lives in areas with short grass and undergrowth where it lives on a diet of lizards, small mammals and insects. 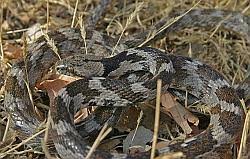 The Cat Snake is also venomous but is no threat to humans because it is rear-fanged and does not possess the ability to deliver its venom to humans. The  consequences of its bite have been described as similar to a bee sting. You are unlikely to come across this snake as they are nocturnal. They generally live near streams, are yellow and brown speckled with black, are distinguishable by a broad flat head, vertical slit eyes and large scales on the forehead.

The Coin Snake is commonly mistaken for the Blunt Nosed Viper as they are similar in appearance, with a large head and a relatively big body. What distinguishes it from the blunt nosed viper, however, is that it's head has large scales and the body has a glistening sheen. The Large Whip snake is the most common of Cypriot snakes. It can reach a length of up to 2.5m which makes it the longest snake in Europe. It is olive brown in colour as it ages but younger snakes can be yellowish brown. If disturbed the snake coils into a spiral and attacks whilst hissing loudly.

Cyprus Whip snake is the only endemic reptile in Cyprus. The young Whip snake is beige, with a pale pink underside, but after about a year its colour starts to change to an olive green. Then after about two and a half years it becomes all black in colour with a green tinge. It lives in dry, stony areas with bushes nearby or near streams. 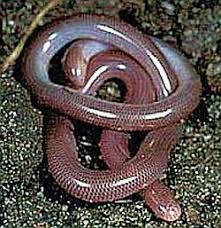 The Worm Snake is very slender but slightly thicker towards the tail. Has a rather flattened head with eyes on top of it which look like two tiny black spots. The snake is brownish, pinkish or purple in colour and usually grows to no more than 35 cm.


The Grass Snake is a rather large snake which can grow up to 200cm. Females grow larger than males. It has a very variable colour with a olive greyish body and  greenish, greyish or olive-brown dark blotches or sometimes light stripes. The snake is very rare and endangered. .

There are a few precautions you can take to reduce your chances of being bitten. These include, not approaching any snakes you see. Apparently, some individuals are bitten because they try to kill a snake or get too close to take a photo. Keep out of their way and instinctively they will move away.

Stay out of tall grass unless you are wearing shoes and long trousers. Keep your hands and feet out of areas you cannot see such as holes or rock cavities.
Symptoms of venomous bites

The most common symptoms of venomous snake bites are a bloody wound; fang marks in the skin; swelling at the site of the bite; severe localised pain; dizziness;  blurred vision; raised temperature; increased thirst; nausea and and a rapid pulse
How to treat snake bites
When treated correctly, venomous snake bites seldom have serious consequences. Keep calm and sit or lie in the shade. Snake bites create shock and fear which is often more dangerous than the poisoning.

Call or get to emergency assistance immediately ,as responding quickly is crucial as it is unlikely that you will be able to identify the snake which bit you.

Some first aid you can undertake are to:

Wash the bitten area with alcohol or with soap and water

Cover the area with a clean, cool compress or a moist dressing to minimize swelling and discomfort.

Don't worry too much. Remember most snakes will do all they can to avoid human contact and will only attack if frightened, cornered or provoked.
Posted by cyprus gardener at 11:27