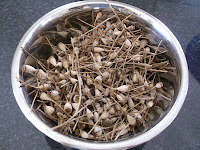 One of our vegetable beds has been covered in poppies this year. Rather than dig these up, we have let them ripen to collect the poppy seeds which we use when bread or roll making to add a crunchy and nutty flavour. 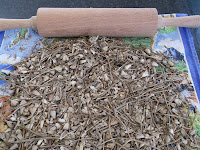 The seeds are ready for collection when the head turns from green to brown to signify the seed head has dried. We have previously collected seed by shaking each individual head into a jar but this is very time consuming.

This time we cut off the heads and collected them in a bowl. Placed the heads on a tea towel, crushed them with a rolling pin to release the poppy seeds and sieved them to remove any bits of husk. The process worked quite well, using a large holed sieve and then one with a much smaller gauged holes to remove smaller bits of husk. Any collected poppy seeds should be stored in a sterilised airtight jar in the fridge and used within 6 months. 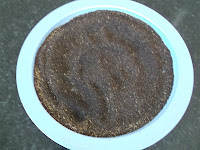 Poppy seeds are tiny and 600g contains about 1 million seeds but the seeds are rich in minerals which include iron and calcium. These seeds have been used for centuries for their medicinal value and are used in cough syrup preparations and to treat insomnia.

People often worry about using poppy seeds because of their narcotic properties but ripe poppy seeds only contain minute amounts, hardly traceable, of morphine and codeine.
Posted by cyprus gardener at 17:35