Cypriot villagers have for centuries used foraging for wild foods to supplement their diet and  the identification of edible wild foods have been passed on from one generation to the next.

We were kindly given some hostes or ostes which are traditionally cooked with black eyed beans during early Spring. The plant is a thistle like perennial plant and is very spiny and in the same family as the artichoke and was collected from the fields surrounding the village. The plants spines are removed to leave the stems which are peeled of their outer skin to leave a celery like tasting stem. These stems are thoroughly washed and either eaten raw or cut and boiled as a vegetable. 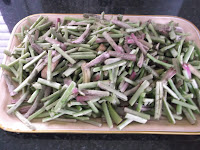 After some research we have found that the plant is cynara cornigera which grows throughout the Mediterranean. We cooked ours tonight with black eyed beans and found them very tasty.
Posted by cyprus gardener at 18:47