How to plant apple trees 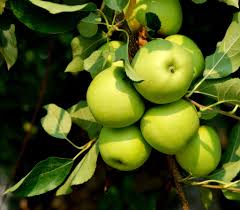 We planted two purchased apple trees in October 2009, as apples need another variety close by for pollination purposes to set  their fruit. One is a local Cypriot variety and the other a late cropper.
We also have another three apple trees which we have grown from offshoots, removed in about March 2010, from a local variety growing nearby.  At the time we thought the offshoots were plums and it was not until the Spring, when they produced leaves and blossom, that we realised they were apples. After the mother tree fruited we found that it produces smallish green apples which are slightly tart, it seems that they are a cooking apple type of fruit.  So, we now think we were fortunate to have made the initial mistake as having lots cooking apples means we can make lots of pies, tarts and sauces. The offshoots are growing rapidly, regular watering for a drought tolerant variety has meant rapid growth, and we should start getting some fruit in the next few years. Once all five trees are fruiting we should be able to harvest apples from August to October and preserve some for later use.
We would recommend, if you have space, planting a couple of apple trees. The trees prefer a pH of 6.5 to 6.8 and should be planted as same depth as the pot they are bought in. Newly planted trees will need watering three times a week for the first two weeks and then weekly but stop watering from mid-Autumn to mid-Winter.
It is also a good idea to mulch apple trees, to help retain moisture and keep down weeds, in March for the first 2-3 years but keep the mulch away from the trunk. Also provide some fertiliser in the winter, at least for the first few years until the roots are well established. If pruning is needed to shape the tree or remove damaged or overcrowded branches also do this in the winter and remove at the same time remove any suckers that have emerged. 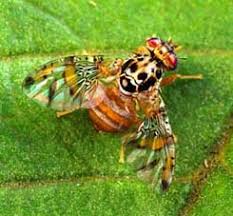 Apple trees can be affected by a numbers of pests and diseases. Two of the commonest pests are: (1) the codling moth which results in grubs inside the fruit and these moths can be combated by hanging a container which has a solution made up of 1 cup of vinegar; a third of a cup of dark molasses; a pinch of ammonia and 4 cups of water. The moths will lay their eggs in the mixture which needs to be changed every 3 weeks between March and April (2) the other main pest is the Mediterranean fruit fly (pictured to the left) which will result in leaf curl and grubs inside the fruit. These can be combated by regular spraying with a strong solution of ecological washing up liquid mixed in warmish water.
Posted by cyprus gardener at 14:13