You cannot beat the taste of home grown tomatoes 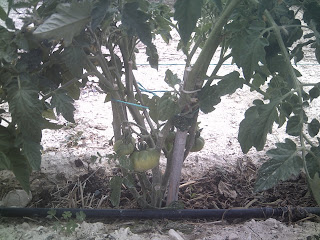 You will absolutely delight in the taste of tomatoes you have grown yourself.  Tomatoes with taste,  rather than those supermarket  tomatoes which can be so bland.
Try slicing a home grown organic tomato and a supermarket one and then look at the difference. Supermarket ones are usually so mushy that the only thing they are good for is pasta sauce.  And even that will not taste as good as it does when you make it with home grown tomatoes.
Everybody who has grown their own home grown tomatoes can verify that they taste so much better. However apart from the taste, home grown tomatoes are simply better for you and better for the environment.
If you enjoy a real, sweet juicy tomato, then, you may be surprised to discover how easy it is to grow your own.  Even with limited space, you can grow tomatoes in containers. You can start them from seed in January, in a propagator or indoors somewhere warm, or buy ready grown plants from a garden centre.  And you can never grow enough, as any surplus can be made into a delicious sauce by cooking down and adding onion. garlic and basil and once completely cooled frozen in batches for later use.
But back to those supermarket sold tomatoes which are picked whilst still green.  Picking before full ripeness  gives  both the grower and the processor enough time to ship them to the supermarket.  However before they are transported,  they are usually sprayed with the chemical ethylene (derived from oil) to finish ripening them whilst in transit,  as they might spend days from picking to being sold.
So when they arrive at your supermarket, they have been artificially ripened with a chemical and they are watery because they have been picked too early.  Added to this,  many tomatoes are grown hydroponically and have never had their roots in soil.  When you purchase tomatoes and cut them open, they are  typically pale on the inside and the flesh is very mushy.  That’s because all that the added chemical did was make them look ripe on the outside.  And that is why they do not have any taste. They’re not ripe! 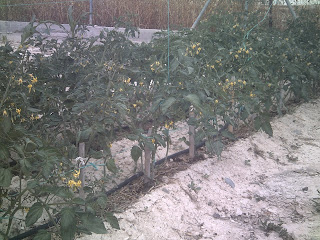 But if you slice open home grown tomatoes, which were allowed to completely ripen on the vine, you see that they’re firm on the inside and full of lots of colour and flavour. And the more colour you have in all of your vegetables the more vitamins and nutrients they contain.
A recent study reported that a home grown vegetable had 84 minerals and elements whilst the same exact vegetable planted from the same seeds  but grown conventionally with the standard chemical fertilizers and pesticides had 8-10.
Once you have had a home grown organic tomato you will never want to buy those supermarket ones again.
Posted by cyprus gardener at 10:11