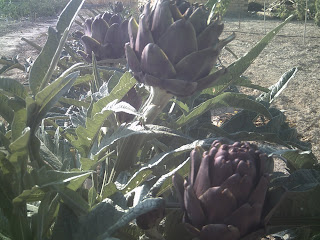 I have always been interested in food as medicine (nutritional medicine) which is an ancient concept and recently many traditional remedies such as chicken soup to treat colds or garlic to ward off illness have been shown by scientific study to have some validity.

We put in a line of purple globe artichokes (a perennial thistle) last November by dividing side-shoots, from well established plants, obtained from a relative in the village. We didn't expect them to do very well in their first year but they have grown to a good size, producing a good crop of globes. The edible part is fleshy base, known as the "heart" and the mass of the artichoke called the "choke" is inedible. After finding out how to prepare the globes (amazing what you can find on you tube) we have been looking for recipes to use them.


Whilst researching for recipes I found out that artichokes were a medicinal food with health benefits. Apparently in Vietnam a traditional tea is made by boiling halved artichokes hearts which is excellent for maintaining good liver function and said it promotes clear skin.

So we tried it and rather than a bitter brew, we were surprised it had a mildly sweet and pleasant taste. In fact, it tasted exactly like an artichoke heart.
Scientific studies have been conducted into artichoke tea have revealed that it contains anti-oxidants, may reduce cholesterol and improve both HDL/LDL ratios and may improve digestion by promoting bile production. The tea is also rich in folate, vitamins A, B1 and C, and minerals such as magnesium, phosphorus, calcium, iron, potassium and zinc. The tea is also a diuretic, helping rid the body of excess water.


So trial and error over countless generations is now being shown by scientific research to be correct. Perhaps we should pay more attention to the ancient remedies rather than expect modern medicine to have all the answers.
Posted by cyprus gardener at 17:13