How to grow your own SUPERFOODS

Superfood is the label given to a food which is considered especially nutritious or in some way of benefit to our health.

But I would be the first to admit that I have always been put off by such descriptions and the media attention superfoods attract. We have always thought that eating a balanced diet which includes lots of fruit and vegetables and which avoids too much sugar, salt and saturated fat is all we needed.

However, if you investigate these foods we would be silly to ignore the extra nutritional and health benefits they provide. Especially when these foods have been shown to lower cholesterol, reduce the risk of heart disease and cancer and, apparently allow you live a longer life.

But what could be better than growing your own organic superfoods and eating them when they at their best or preserving them to enjoy later.

The following are 14 superfoods grow well in Cyprus and in Mediterranean area or you can consider adding them to your diet.

Avocados are high in calories but full of essential nutrients, including potassium, B-vitamins and folic acid. They act as a nutrient booster when eaten with other foods, as they help the body to better absorb cancer fighting nutrients found in vegetables such as spinach.  Avocados have  also been shown to lower cholesterol levels, aid in regulating blood pressure and help protect against heart disease and strokes. Try to include, when available, half or whole avocado several times a week.
2. Beans

You can grow all sorts of beans in the Mediterranean area and with drying and freezing have your own beans available all year round. The Cypriot favourite is black eyed beans planted in June and harvested from August to October. However, you can grow broad beans, French beans, soya beans, butter beans and many other legumes.

Beans are rich source of calcium, iron, potassium, B vitamins, plus protein and fibre. They may also lower cholesterol levels, which can help keep your heart healthy. Replacing a few meat based meals per week with beans is, therefore, a recommended change we should all consider.

The fibre in meat is digested by our bodies quickly, whereas the fibre in beans is digested slowly, keeping you full longer. Replacing meat with beans will, more importantly, reduce your intake of saturated fat but at the same time providing you with the protein required.

Beans also have phytochemicals which are compounds high in antioxidants and these can fight cell damaging free radicals in the body which have been implicated in many diseases including cancers.
So try, as the latest dietary guidelines recommend, to eat 1 to 3 cups of beans per week.

Broccoli has a long growing period and is started around September and harvested during February to March.

Broccoli is a rich source of vitamin A, which is good for the repair of body tissues. It is also has vitamin K, which is important for normal blood clotting and healthy bones. But it's broccoli's cancer fighting powers which makes it a superfood. Broccoli, along with cabbage and cauliflower, contain phytochemicals that stimulate the production of cancer fighting substances by the body. And studies have shown that there is strong evidence that broccoli lowers the risk of tumours in the prostate, uterus, stomach, throat, lungs, colon and pancreas.
Try to eat two portions of steamed or raw broccoli, cauliflower or cabbage a week.
4. Figs 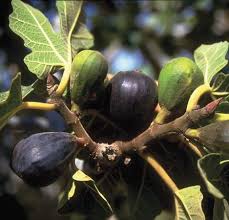 Fig trees can be seen everywhere in Cyprus and across the Mediterranean and is a beautiful tree to include in your garden. The flavour of a fig just picked is a delight.

Figs have the highest overall mineral content of all common fruits and are packed with potassium, manganese and antioxidants. The high potassium level in figs may help to control blood pressure.

Figs are also high in calcium, iron and vitamin B6.

Figs are a good source of fibre, more fibre than any other dried or fresh fruit and this helps lower cholesterol and protect against colon and breast cancer.

Try to include 3-4 dried or fresh figs in your weekly diet.
5. Garlic

Plant your garlic cloves in December and harvest once the leaves have turned yellow and dried out. Carefully dig out the bulbs and allow to dry in the sun for a week before storing.

Garlic is the most widely used medicinal plant in history. A member of the allium family, it is known for its antibiotic, antifungal and antiviral properties and has been used for centuries to treat  a variety of ailments.

Modern scientific studies have confirmed garlics ability in helping to fight infections and help protect against heart disease by thinning the blood and helping to lower cholesterol.
Try to include garlic in your daily diet, preferably raw or lightly cooked. Try to eat garlic soon as possible after peeling, as its potency fades when exposed to light. Cooking diminishes the garlics properties, but it is still better to eat it cooked than not at all. If you don't like the smell on your breath try chewing parsley afterwards.
6. Globe Artichokes 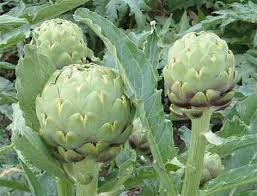 Plant globe artichokes offsets in November and harvest 10-12 heads per plant between April and June.

Globe artichokes are a good source of potassium, vitamin C, folate, magnesium and dietary fibre.
Studies have shown that artichokes contain a very high amount of antioxidants in the form of phytonutrients. Among the most powerful phytonutrients are cynarin and silymarin, which have strong positive effects on the liver and help to detoxify harmful chemicals from the body.

When artichokes are in season, find as many recipes as possible to include them in your diet.

Grapes can be harvested from July to October. Besides being enjoyed fresh, they can be pressed to make juice, wine, must roll or dried to make raisins. Vines are traditionally planted in March and at a distance of 2.4 metres apart.

The benefits of grapes have been long known. And particularly, red grapes which contain flavonoids which are the powerful antioxidants that give grapes their colour. These flavonoids help to prevent blood clots forming in the body, are anti-inflammatory, help in protecting against cancer and have been shown to increase life expectancy.

Grapes also contain resveratrol which has been shown to protect against damage to arteries,  help in lowering blood pressure and reduce the possibility of cancerous tumours.

Grapes are also a good source of manganese, vitamins B1, B6 and C and potassium.

Enjoy red grapes whenever possible, fresh, juiced or as a glass or two of red wine.

Goji berry (also known as wolfberry) is a fast growing plant which grows in all climates and all soil types, as long as there is good drainage. It's berries are harvested from August  to November and each plant will produce about 1Kg of berries in its second year.

Goji berries have been found to have the highest antioxidant level in any food and these compounds act to destroy free radicals that cause cancer and speed up the ageing process.

Goji berries also contain beta-carotene, vitamins B1 and B2, minerals and amino acids.
Goji berries are widely used in traditional Chinese medicine and are believed to strengthen the immune system, help eyesight, protect the liver and improve circulation.
Harvested berries can be dried, eaten raw or brewed into a tea.
9. Leeks

Maincrop leeks are sown in Cyprus in September but can be sown until December and are harvested between March and May.


Like garlic, and the rest of the allium family, leeks can help the liver eliminate toxins and contain quercetin an antioxidant which protects the body against cancer. Leeks also contain sulfur compounds that may protect against heart disease and can lower blood pressure.
Leeks contain prebiotics, which are essential for probiotics to thrive in the intestines  which help boost the immune system. They can also help stabilise blood sugar levels because they are high in folate, manganese, iron, vitamin C  and vitamin B6.

Try to eat allium vegetables regularly and everyday if possible.
10. Oregano and Other Fresh Herbs and Spices

Many herbs are native to the Mediterranean area and are easy to establish and grow.

When researchers analysed foods to identify those with the highest level of antioxidants, of the 50 foods highest in antioxidants, 13 were herbs and spices. Herbs are also an anti-inflammatory and can assist in keeping your heart healthy.Try to include these herbs and spices in your weekly diet; oregano, basil, ginger, black pepper, rosemary, cinnamon, turmeric and chives.
11. Pomegranate

Grown throughout the Mediterranean, pomegranates are easily established and, once mature and fruiting, can be harvested between September and October.

Pomegranates have been used for medicinal purposes for centuries particularly for digestive problems. But modern scientific research has revealed its true health benefits.
Pomegranates are now known to combat heart disease and lower blood pressure. They also contain three times as many cancer-fighting antioxidants as green tea and are believed to be particularly effective in fighting off prostate cancer and breast cancers.
Pomegranates are rich in vitamins A, C and E, and iron, which helps the blood maintain an effective supply of oxygen to the body.
Try to eat one fruit, several times a week, or drink it juiced. 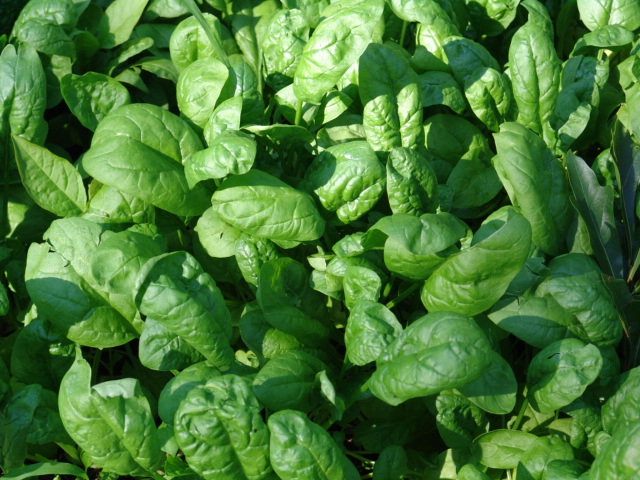 Can be sown regularly between September and February for a continual crop between December and May.
Spinach is an excellent source the B vitamin folate which helps to prevent heart disease, dementia and colon cancer.

Spinach is rich in antioxidants, vitamins A, B2, B6, C, E and K, magnesium, folate, iron, copper and zinc.

Another compound in spinach is lutein which aids against macular degeneration, which causes age-related vision loss.
Because of it's high vitamin K content, spinach also helps protect against strokes and build stronger bones which can lower your risk of osteoporosis.

Finally, spinach contains nutrients which have been found to increase the skin's ability to avoid damage from sunburn and reduce your risk of various skin cancers. 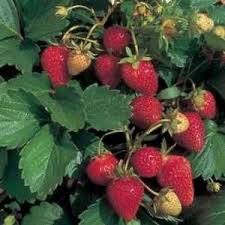 Plant October to November and harvest from May to September.

Strawberries are a rich source of vitamin C, K, B2, B5 and B6, potassium, copper, magnesium and omega-fatty acids.

In addition, strawberries contain anthocyanin, which has been shown in various studies to help in preventing cancer and which has anti-inflammatory properties. Strawberries are higher than most fruits in antioxidants, which give strawberries their red colour, and these help to strengthen the bodies tissue defences against oxidation and inflammation which are underlying factors in most age-related diseases.
Enjoy strawberries when fresh and preserve for later use. 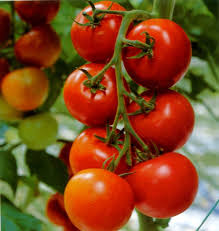 Start your tomatoes under heat indoors during January and start enjoying freshly picked tomatoes from May onwards.

Tomatoes contain high levels of beta-carotene, an antioxidant that supports the immune system and helps maintain healthy skin and tissue. They are packed with antioxidant flavonoids and vitamin E, both of which are essential for a healthy heart .

Tomatoes and are a good source of potassium and one medium sized tomato can provide 50% of the recommended daily dose of vitamin C.

Tomatoes are a very rich source of an antioxidant called lycopene which is the pigment which makes tomatoes red.  Lycopene neutralises free radicals which, if allowed to build up, can cause cell and arterial damage triggering cancer and heart diseases.
Eat tomatoes regularly either raw or cooked. Studies into the Mediterranean diet, which is known as one of the healthiest type of diets, suggests that cooking tomatoes with olive oil further improves their potency.
Tomato juice is also a good way of increasing your dietary intake.
Posted by cyprus gardener at 10:42