The challenges of Mediterranean or Subtropical gardening


For anybody relocating to a Mediterranean or Subtropical area, the climate provides certain challenges that gardening in the UK and Northern Europe does not.

A climate with extremely high summer temperatures, reduced rainfall and mostly mild winters. In Cyprus, for example,it's a climate where spring generally runs from mid-February to mid-May, summer from mid-May to mid-October, autumn from mid-October to the end of November and winter from December to mid-February.

There are four other areas in the world which experience similar subtropical climatic conditions. Included are much of California, parts of Western and Southern Australia, South Western South Africa, parts of Central Asia and parts of Central Chile.

There are certain differences, which if understood, will enable you to adapt gardening methods to suit theses climates. Primarily, you need to understand the seasons and work with them. We have to almost start from a zero knowledge base and forget, however experienced we were, our gardening experiences in Northern Europe, as it can be a real problem if we focus too much on how we did things before.

Understanding what distinguishes a Mediterranean or Subtropical environment is crucial. It is one in which there is a hot, dry period, when temperatures can reach 50c, with sometimes hot drying winds, little or no rainfall and a high humidity throughout the year. Rainfall is mainly concentrated during the winter period. 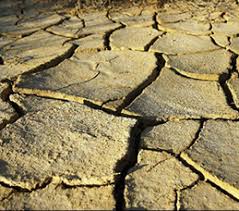 In Northern Europe, there is consistent year round rainfall, whilst in the subtropical areas, there is anything from between 3 to 6 months of drought.

Understanding the implications of this uneven rainfall is the key to successful gardening. This fact alone will make the difference between a garden in which things grow and a garden that becomes hard work.

Where there is consistent all year round rainfall, plant material easily breaks down providing humus for the soil which helps moisture retention. However, when this rainfall is concentrated mainly in the winter months, plant material does not readily breakdown but oxidises in the sun. This means there is lack of humus in the soil, as rather than rot down plant material is sun baked and if not removed can build up to create a fire risk; can suffocate new growth and  wind and rain can move the plant material exposing the soil to erosion. None of these factors are good for the garden soil. 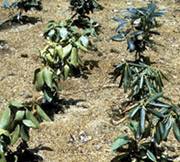 The four or five month drought in the summer months is a normal part of a subtropical climate and is easily survived by the plants that are native to the area. Newly arrived gardeners often purchase and put in plants from garden centres during this drought period without realising that to survive plants will need to be kept constantly moist until roots are established.
Rain can also be problematic, when it does rain, mainly in the winter months, it can be up to the 70 centimetres of rain in a day which can result in flash floods, washing away of soil and uprooting of plants. 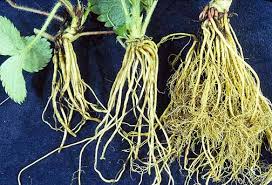 What is important in planting self grown plants or shop bought plants is the quality of the root system. Patience is needed, as without a very good root system plants will not survive. Ensure the root system is well established otherwise plants will not have the capacity to get the water needed to grow. This means sometimes potting plants on for a period before planting out. This applies to trees and shrubs as well.
It is also important to avoid large areas of bare soil between plants, as these will be baked hard by the sun and affect the plants nearby. Try to cover all soil areas with ground cover plants and provide a mulch or allow a natural mulch to cover bare soil. Mulching will help retain moisture and cool roots of plants. It is also good policy to continually improve your soil by applications of organic material to moisture retention capacity and nutrient levels.
In Northern Europe we are used to the constant watering of shallow rooted annuals but new gardeners to subtropical climates can mistakenly assume the same is needed without realising that most subtropical plants are deep rooted and are better off with a less frequent but thorough soaking down to the level of the deepest roots. Over watering these deep rooted plants can cause fungal and viral problems.
It is also good practice to avoid planting drought resistant and thirsty plants close together, as watering to keep the thirsty plants alive will cause fungal and insect attacks on the drought resistant ones.
Posted by cyprus gardener at 06:29